Welfare states are at a critical turning point. The development of welfare systems was one of the defining characteristics of the 20th century, especially in Europe. However, in times of change, it is important to re-think “the welfare state” with a programme of innovative research designed to ask, and answer, fundamental questions about the design, delivery and experience of welfare in the 21st century. 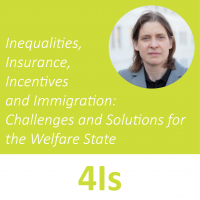 Globalization and European integration are confronting national welfare states with a series of challenges in the 21st century. These include international trade and technology, the integrated European labour market, the transnationalization of citizenship and welfare rights, migration as well as persistent social inequalities. Recent changes in income inequality have been influences by past changes in policy and in the socio-demographic and labour market conditions. The labor market and income inequality effects of globalization constitute some of today’s most pressing policy dilemmas. Welfare states within Europe developed different methods to protect their households from adverse shocks, however there are also differences in the ability of current welfare states to reduce inequalities in the future. Support for social security systems is for instance influenced by the influx of labor migrants and the perceived abuse of welfare systems. Projects in the Globalisation, Welfare States and Inequalities Cluster address the following questions: What are the determinants and patterns of inequality and how are citizen’s preferences for redistribution and welfare services formed? What is the role of welfare state policies in countering the labor market and income inequality effects of globalization? How can welfare states meet recent challenges and how can concerns for personal responsibility be integrated in the design of welfare schemes in a way that is perceived as fair? What happens to workers affected by technological innovation and how may this interact with welfare institutions such as unemployment benefits? How do the transnationalization of citizenship and welfare rights impact EU welfare states?